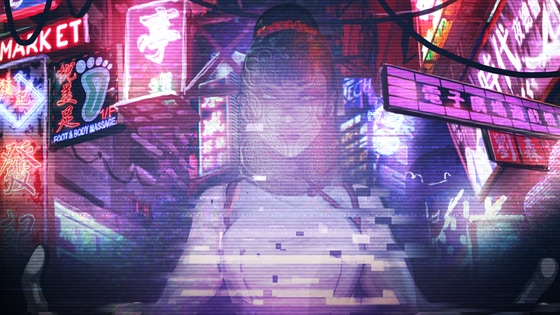 In 2083 Neo Hong Kong, a young woman named Mei Lin Mak is dragged into a maelstrom of supernatural horror. As she peers deeper into the century old mystery, Mei will be forced to question her perception of reality and her trust of her cybernetic eyes. Under the neon lights of a cyperpunk dystopia, the ruins of the 'Chong Sing Apartments' hides a bloody mystery illuminated by both the traditions of Chinese folklore and the innovations of the industrial future. If there is any hope of escaping this nightmare, Mei-Lin must explore this complex, piecing together the stories of 14 lost souls, and discover the truth of her own family curse.

Latest Updates from Our Project:

We have news of all kinds this month, all of which we hope will put everyone's' minds at ease in one way or another.

First up, Sense should now be content-complete, and a QA build has been sent to our high-tier backers, as well as various other QA testers for bug testing! We have spent nearly 2 weeks testing internally and working out all kinds of bugs and errors, but of course more eyes and hands on the game at this point is necessary in order to ensure that nothing is going to crash or break the game once we release. Current global situations have also complicated internal development slightly, but luckily not to the extent to which we have caused any delays or problems.

We still have a small number of assets to complete on the art end; some cutscene animations, props, and some remaining music/sfx, but we do not anticipate this taking any more than 2-3 weeks to finish up. Our plan is to continue testing until the first week in June while making daily updates to the testing build based on what we continue to find internally and the feedback we receive, and from there make a firm decision about our release date then based on the results.

This means that we, unfortunately, will likely push back the PC digital release until August. The good news is that if such, the PC release will simul-release along the console versions, as they were already planned to release in that time-frame. Do not worry, we will still need to have the game complete and sent to the various platforms for their QA and approvals by early July to make sure that our logistics all work out as planned. Our publisher, Top Hat, has several releases lined up for July so we also don't want to crowd their release schedule, nor make other developers delay their own games because of our own scheduling. In full transparency, the August release is looking very likely, but I want to assure every one of you that this is not a "typical kickstarter game" situation. The game is nearly ready (hence why QA backers have received it already), we just want to make sure that our first impression is an amazing one, not one we have to fix with patches over time with. We are still operating under our original development schedule internally. This also still falls within the original plan to have console versions launch before the end of summer as mentioned above, which would be under an August release schedule. PSVITA release should be completely unaffected by today's news. We are still on our original schedule regarding PSVITA, and this has been discussed with EastAsiaSoft. If for whatever reason, however, we are able to launch in June we will let everyone know sometime around the 6th!

We do plan to make an update to the demo on Steam soon as well, but we want to make sure that the full build is stable first.

Now, on to the more frustrating and annoying bit of today's update. We were in fact suspended from Twitter a few days ago, as some of you may know. We received no emails regarding the suspension, no warnings, and despite appealing twice no emails back yet regarding those either. This in no way affects the development of the game, but being without our largest platform for marketing and PR is a huge blow to our visibility when we launch. I want to clarify that, as far as we know, we have no reason believe there was any targeted action, political motivation, or otherwise shady practices that caused the suspension. We have done some digging and reading through the Twitter rules and ToS and found some clues as to what may have happened. We don't believe we should have been suspended, but this was likely not done by a person, but rather algorithms and ban-bots which don't seem to care. Again, we have appealed the suspension and done what we can to reach out to twitter support for help with no luck yet. Hopefully we get it back in time to start pushing the game as hard as possible, but if not we need all the help we can get!

Anyone up to lend us a hand, please share the steam link here and ask everyone to wishlist us! -https://store.steampowered.com/app/1120560/Sense___A_Cyberpunk_Ghost_Story/

We hope that you all had an awesome Memorial day and wish you and your families good health! Sense is coming soon

Hello everyone! Gigantic news! The core gameplay for every location within the game has been completely implemented and is now being tweaked, spell-checked, and polished. Further, all 14 of the key ghosts have been drawn, rigged, and fully animated. Some necessary tweaks and polish is necessary before we can implement them into the chains but this is set to happen before the end of February! Even further still, the 1975 chapter's BG art, ghosts, and player character has been completed and core gameplay chains are being implemented now as well. You may have seen our posts over on Twitter, if not check these out!

For the next image I want to show everyone that Miri's design has been updated. I chose to make her a few years older than I originally thought, because I legitimately incorrectly counted the timeframe for this portion of the story due to how it connects to later parts of the main game's lore. Miri is now 19 or so, instead of 15 and is a young actress about to star in her first major production.  I also wanted to give her an outfit that links to Mei's bright yellow, and helps her stand out a bit on the dark forest background. TL;DR. Ben is good at writing and drawing, but terrible at math, so Miri has to be a few years older for the story to make sense.

Next up, we have begun the process for ordering our Mousepads! Check out our production sample:

Next up is the packaging, posters, and artbook. All of which will be ordered when the game is much closer to complete, we anticipate sometime in mid March. If you didn't pledge to receive any of these - including the mousepads - as part of the main KS campaign but now want some, don't worry! Go through to the Backerkit link on the main page here, and you can find them for order there.

Rest assured we are all working our butts off to get Sense out soon, but more than that, to make sure it is an incredible experience. There is still a ton to do, but the remaining tasks are largely art related and implementation, but things are moving very rapidly towards the finish line. I truly can't wait to see what everyone thinks of the game. Our next planned update will talk more about our launch strategy as we are considering some ideas now, so hopefully by then we can have a narrowed down release window.

As always thank you all for supporting us and your continued patience and excitement. I know you all want to see more of the game than we have shown but I promise it will be worth the wait to see the locations and ghosts for the first time when you are actually playing!

Happy Chinese New Year to everyone, and Ga Yau!

We also want to shout out our friend Garrick on his kickstarter for the incredible cyberpunk "Clothformer" LAZR. Garrick is doing an amazing job as a solo dev - programming, modelling and drawing it himself - and is bringing the exact kind of fresh thinking and exciting ideas to the table that the industry badly needs. We are really excited to include Lazr as an NPC in Sense (take a look at the video below) and highly recommend everyone hop over to his kickstarter and support him, by clicking the link below:

Hey everyone! If you pay attention to our twitter you may have seen something very exciting, and we apologize for not finding time to throw that update here as well. East Asia Soft has announced and confirmed their partnership with Top Hat Studios to co-publish Sense on Nintendo Switch physically. This means a few things;

- We can now send out the backer survey which will allow All KS campaign backers (who backed for a physical copy) to select the physical version of their choice, including Nintendo Switch. By the time you see this the survey email's should have either gone out or be going out very shortly! Make sure to check your spam folder if you don't see it. Make sure you get your survey in as soon as possible to help us with our order totals!

- We will be running additional Switch preorders exclusively through EAS/Playasia at a later date, closer to launch. So if you want an additional copy of the game on Switch, please make sure you follow us on Twitter at @ProjectSenseDev, and sign up for our email list on projectsensegame.com to make sure you're notified when that'll be.

- We have finally crossed a huge hurdle for us internally, meaning the coming 4 months is nothing but finishing development.

That said we thought we would update you on how things are looking. As usual, we are not crazy about showing much of the game's visuals as it would definitely take a chunk of the tension and spectacle out of your first playthrough, but a few new screenshots doesn't hurt.

The big update here is that EVERY location in the main game has been built out and is ready for gameplay chain implementation, polish, etc. This was the hardest part as making all the 2d, 2.5d, and 3d assets as well as crafting every room to look interesting and unique, yet cohesive was a gigantic task.  The apartment complex has 7 floors total with dozens of apartment rooms to explore. As of writing this, the additional streets,1st, 2nd, and 3rd floors are gameplay complete and being bug tested, polished and adjusted. While the 4th and 5th floors are deep in progress. A LOT more needs to be done before the game is ready, and the 1975 chapter will be tackled in its entirety in January. But the slowest and hardest part is complete.

As of right now we are pushing towards an April deadline for completion of dev in full, and making good time on that goal. It will be a very difficult few months, but getting the best version of this game in your hands as soon as we can is all the motivation we need.

For those of you who preordered, or plan to add on, the oppai mousepad, Ben has also finished the art for that! We will be ordering these closer to launch as well due to manufacturing logistics. Take a look!

The CE slip case art is next up on the chopping block between development. So we hope to have an update on that soonish. Most likely after the holidays.


As usual, thank you all for sticking with us, Sense is getting closer to complete, but none of this would have happened without you!